NOW AVAILABLE: The Weight of Salt (Book One) 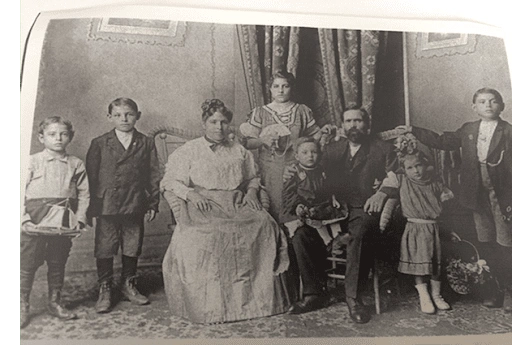 Our family story all began in a corner of Tampa, Florida known as Ybor City and referred to as The Cigar Capital of the World. Back in the late 1800s and early 1900s newly arrived immigrants from Italy were drawn to Ybor City to find work and create homes for their families.

In my book, The Weight of Salt, I recount the story of my great-grandfather, Domenico, who before he could speak English, carried a small wood burning stove to the Ybor City train terminal and timed cooking his sausage sandwiches in line with the arrival and departure of trains.  He said "If you are going to sell something, sell food, so you will never go hungry."  The smell of sausages lured hungry travelers and Domenico was able to earn enough to build a small grocery and sandwich shop at the edge of the terminal. He later built a home attached to the grocery store where he raised his six children. This is where the story really begins.

THE JOURNEY TO AMERICA

Between 1876 and 1930, more than five million Italians immigrated to the United States—the majority fleeing grinding rural poverty in Southern Italy and Sicily. These immigrants were desperate enough to leave everything behind and journey to a new country with only a few dollars in their pockets, knowing no one, and unable to speak the language. Today,

Americans of Italian ancestry are the nation's fifth-largest ethnic group.

THE ITALIANS IN TAMPA (Ybor City)

The Italians of Ybor City arrived almost exclusively from Sicily. Life was unimaginably hard in the mid-to late 1800s. Most of the immigrants came from Sicily’s southwestern region, a hilly area containing the towns of Santo Stefano Quisquina, Alessandria della Rocca, Cianciana and Bivona. These villagers struggled with poor soil, malaria, bandits, low birth rates, high land rents from absentee landlords, and even wolves. The completion of the Plant Railway to Tampa (1884) and Vicente Martinez Ybor’s development of Ybor City (1886) made the Tampa area an attractive destination for these immigrants. Thousands–including the many Sicilians who either came directly to Tampa or moved there from their initial U.S. “landing spots”–found work in the cigar trade, as well as in the myriad of other enterprises that supported Italians in the community.

Italians mostly brought their entire families with them, unlike many of the other immigrants. Once arriving in Ybor City (pronounced ee-bor), Italians settled mainly in the eastern and southern fringes of the city. The area was referred to as La Pachata, after a Cuban rent collector in that area. It also became known as “Little Italy."

THE CIGAR CAPITAL OF THE WORLD

At first, Italians found it difficult to find employment in the cigar industry, which was dominated by Hispanic workers. The Italians arrived in the cigar town without cigar-making skills and started at the bottom of the ladder, positions which did not involve handling tobacco. Working beside unskilled Cubans, they swept, hauled, and were porters and doorkeepers. The majority of the Italian women worked as cigar strippers, an undesirable position. Eventually, many Italian women became skilled cigar makers, earning as much as their male counterparts. In the end, approximately 20% of the cigar factory workers were Italian Americans

"The Weight of Salt (Book One)" tells my Italian family story.

...The Suffragettes crusade for women’s rights, an unparalleled influx of Italian immigrants arrive believing the streets of America are paved with gold, and the Mafia threatens from the shadows. Angelina dreams of independence, yet it grows distant when she’s sent to menial task at a cigar factory.

It is her kindly uncle Pasquale who lights the lantern of reassurance and uplifts her spirits with his humor and gentle manner. When romance enraptures Angelina, she comes alive...,

Where my great family story began.

Along the way, Manhattan became home.